Ok, so yes I’m offically raising my hand & admiting I’m a complete craft nerd. My sister has called me a craft nerd forever & it used to drive me bananas everytime she would say it.

What finally forced me to embrace/admit my “nerdiness” you ask? Well, besides the most of stamping/craft material that I own, my sister & I are booked for the Crafty Chica art cruise. She’s going for the cruise, no arts, no crafts whatsoever. Just rest & relaxation in time for her birthday. Me? I’m the one that talked her into going with me because I wanted to take some classes & have a fun vacation at the same time. Oh yeah, I didn’t want to go alone either….

I’ve discussed with friends about my trip but didn’t admit to the “crafting” part of the trip until just recently. Only a couple of really close friends knew the whole story about my upcoming trip. My wonderful sister decided to spill her guts about the trip in public this past week – to my boss, while we were at work. Ah the beauty of working with my sister! I was so freaking mortified & my boss now thinks I’m even more of a dork than I was before. Jeez! I think I may sign her up for some of the crafting classes during the trip just to get even.

She keeps telling me that while we’re on the ship, she’s going to dance by in a conga line with a fruity umbrella drink in her hand, laughing at me because I’ll be stuck inside working on crafts. Ha, ha, ha……yeah very funny. Little does she know that I’m really looking forward to the craft projects. I’ve never been on an extended craft class/retreat so this is going to be so much fun for me. It’s going to be my way of relaxing. I can’t wait!!!

I’m kind of nervous about the trip since I’ve never been on a cruise before. I’ve been on a ferry, on boat trips around the Chicago lakefront, but these trips have never been more than just a few hours. This is going to be 4 days on a boat! Yikes! I’ll have to make sure I pack the Dramamine.

We also have to get our passports or we won’t even get on the boat. I’ve never had a passport before. I’ve always used a copy of my birth certificate for identification. Since the laws changed a couple of years ago, Americans can’t leave the country without one. Feels like you need to jump through hoops just to get one, but it’ll be worth it because then I’ll be able to travel outside of the U.S. without any issues. Hopefully my passport pics don’t turn out looking like mug shots! LOL!

We’re going to stay a few extra days in San Diego after thre cruise. We’ve never been to CA before so we’re looking forward to that too. I need to do some research on fun things to do that aren’t total “tourist” stuff. I don’t want to go to Sea World or the zoo. I think I’d prefer to do stuff outdoors instead of indoors, like in a museum. I want to do something different & fun. My sister told me she wants to go to the beach. I think I saw some info about wineries near San Diego….I might add that to the “to do” list. I requested some info from the San Diego visitor’s bureau. Hopefully it shows up soon. 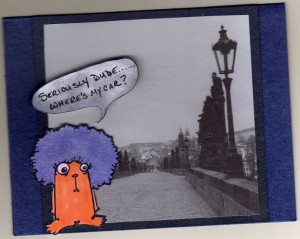 I purchased some unmounted stamps ages ago from Doodle Factory/Starving Artistamps. I finally had a chance to mount them recently & fell in love with their quirkiness all over again!. They’re wierd, funny & cute all at the same time. Anyhow, this little guy is called Frozey. I stamped him on a piece of scrap white cardstock with dye based ink. I colored him in with Copic markers – Honey for the body, Pink for the eyes, Lavender for the hair & Fuchsia for the nose. I added clear glitter gel pen to the hair & cut him out carefully.

The black & white picture is from a 12×12 sheet from Stamp-it an Australian stamp company. I think there’s 9 different images per sheet. I cut them out individually so I could use them for other projects.

I hand wrote the sentiment & drew the word bubble around it. I lightly stippled some black dye based ink. I made sure to tap off excess ink on a paper towel before I applied it to the paper so it would show up gray instead of black. It dulled my letters a little, so I traced over them with a black Sakura micro tipped marker. For a simple little card, he turned out really well! I like him a lot. 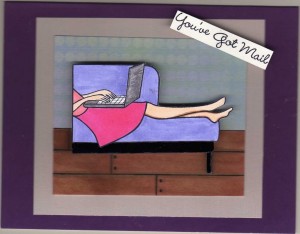 So I purchased this cool set a little bit ago from My Favorite Things (MFT). I learned a new technique to make the wood flooring posted on Splitcoaststampers by Candice one of the MFT design team members. It’s really cool & super easy. I finally had a chance to try it out over the holiday. Mine looks a little different than the one Candice did, but I’m pretty happy with the final product.

I stamped the image on white cardstock with dye based ink. I used a lavender Copic marker to color the sofa back & seat. I used 2 different shades of pink for the girl’s top & skirt. Then I colored the laptop with silver glitter gel pen. For the sofa base, I used black Glaze pen. It looks really shiny in person. I used foam tape to pop it up so it looks 3-D. On a scrap piece of cardstock, I drew lines with a Sakura micro tip black marker, then added the dots & extra lines to beak up the bars so it looked like flooring. Then I used Sepia Copic marker to color all of it in. I added Clay Copic marker to highlight. The background “wallpaper” is from some scrap Memorybox cardstock (Sprout collection). I mounted that to a piece of pinkish-beige Japanese linen cardstock. I stamped the “You’ve Got Mail” sentiment on a scrap piece & popped it up with foam tape. Lastly, I mounted all of this to a purple card – it’s white on the inside so you can write your sentiment. I think it’s from Memorybox.

I think the hardest part was cutting out the sofa/girl & waiting for the glaze pen to dry. Otherwise, it all came together really quickly. I think I might try a few other color combos too. I’m really pleased with how this turned out.