So back in April I posted about some stuff I was working on.  The pic showed some bits and pieces still in progress.  I wanted to put something together with the Sacred Heart image from Bombshell Stamps as the central image and used my canvas book from the 2008 Crafty Chica Cruise as an inspiration.  I kept adding different elements and taking things out that didn’t work.  I had a heck of a time trying to pull all the elements together.  It took me forever to work out the final product, but I’m really happy with the result.  It’s so multi-dimensional and I find something new to like about it every time I look at it. 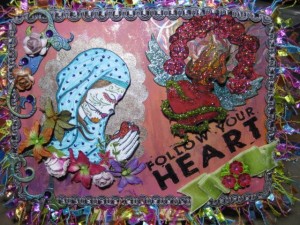 I usually work with mostly paper and create different kinds of cards.  The base of the whole piece is a 5×7 piece of Clayboard by Ampersand that I’d been hanging onto for a while.  I used various Adirondack Ink pads and swirls colors together.  I started with the lighter colors first and let the ink dry completely before I layered on more color.  When it was the final shade and tone that I liked, I randomly brushed some citrine and gold Lumiere paint to add some shimmer.  I barely dipped the brush in the paints and just swiped randomly.  Once everything was completely dry, I was then ready to build layers.

I really wanted the Sacred Heart to have wings and look like it was in flight.  The wings are from the Tim Holtz Grungeboard Elements Swirls Set.  They were already die cut.  I painted them blue and then added several layers of Distress Crackle Paint in Clear Rock Candy.   I think I have about six layers and let it get really crackly!  I bent the wings once they were dry to add extra cracks and then swiped Glitz Stickles in Mermaid over the top.  I colored in the Sacred Heart with Copic Markers and added dimension with different shades of stickles, then I popped it up against the wings.  I wanted the look of flames to appear from behind the wings and Sacred Heart.  I added swirls of Smooch paints in different colors but could make it look right.  I found some fabric I had with a rose pattern that looked cool.  Once I glued it on the piece, I added some Stickles to make it glittery.

The Day of the Dead praying girl is also a Bomshell Stamps image.  She’s holding a heart and I thought it really went well with the whole theme.  I used Smooch paint in different shades to color her in and then used Stickles on her veil for that glittery pop.  LOL!  The flowers are from Prima Flowers.  I had gotten them from the $1.99 bins at Archivers ages ago and finally put them to use.  I also used some swirls from the same Grungeboard set as the wings.  I only painted these with Lumiere paints – no Crackle paint, but I did add some purple bling.

The confetti ribbon and the grey bric-a-brac were from the remainders I got from Jo-Ann Fabrics.  I had planned on using the confetti ribbon from the beginning, but realized as I was finishing the piece that I needed something for the edges.  The grey bric-a-brac gave it just the right look.  The green velvet ribbon with the metal flowers was supposed to be a book mark.  I scrunched up the ribbon so it looks like it’s flowing.  The final thing I added were the words “Follow Your Heart”.  These are from the Art Words II set from Invoke Arts.  It tied all of the elements together and was exactly what I was thinking.

I know it seems like it was a lot of work, but it really wasn’t what took me the longest was just trying to get out of my own head and let the ideas flow.