So I’ve had some blank wooden boxes I got from Michael’s ages ago.  They’re the cigar box size and could be used to make those wooden cigar box purses.  I was originally going to try making them into those cigar box purses but I never got around to it.  LOL!

So I ened up sanding a few boxes to smooth out any bumps or scratches and then painted them with different colors of Lumiere paints. 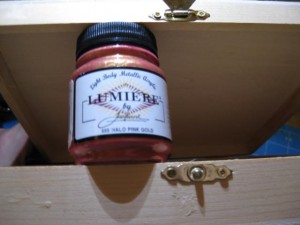 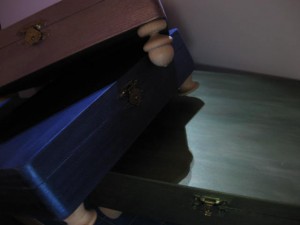 You probably noticed that I added feet to the bottoms of the boxes.  The feet are unfinished knobs.  I’ll be painting them too – 1st with a base coat of the same color I’m using for the box, then I think I’ll use a color to coordinate with whatever design I decide to place on the cover of the box.
So I painted one of the boxes with Lumiere Halo Pink Gold and it dried to a golden orange color with a pink undertone.  I’ve been struggling with ideas for designs or images to place on the cover.  I ended up finding a cool dragon stencil by Tulip (Duncan Enterprises).  This line has repositionable adhesive on the back so it won’t slip while you’re working with it and it’s a fairly affordable line of stencils too!  Luv it!  It was super easy to use and cleaned up really well.  Since the stencil doesn’t come with an acetate to store it on, I placed it on some wax paper so that I could use it over and over again.
Anyhow, I used Metallic Olve Lumiere paint to stencil in the dragon, but I wasn’t too excited with the results after I was done.  After mulling over the colors and patterns for a while, I decided to out line the entire dragon with a black Sakura brush marker.  I love this marker because of the fine tip and the control you can have over the brush strokes.  I decided I wanted the image to “pop” and wanted some glitter.  I ended playing around with different color Stickles in layers, but making sure each layer was dry before I added a new color.  I found a Magenta stencil of plum blossoms and branches in my stash that I got at Stampology a while back.  So here is the work in progress……… 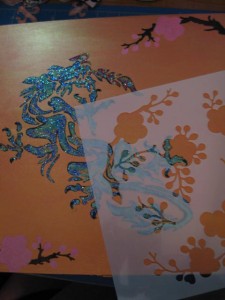 The Magenta stencil was a little hard to use even with repositionable tape.  I think it’s because I was painting with Smooch paint, versus stippling color in layers using an actual stippling brush.  I free-handed some extra branches and I’m going to add more blossoms, plus fill in the centers of all of the blossoms.  I also need to make the flames from the dragon’s mouth more red and orange.  I’ll post a new pic and update as soon as I’m done.